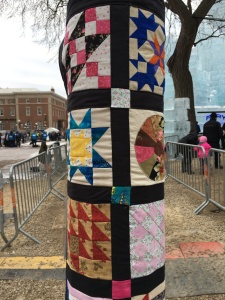 The idea of an Underground Railroad taking people north to freedom was used to describe the network of abolitionists and safe houses that helped slaves escape to Ohio and Canada. Safe houses along the way were known as “stations”, those who guided the escapees were called “conductors” and the runaways themselves were called “passengers”.

Harriet Tubman was one of the best-known conductors on the Underground Railroad. After she made her escape from slavery, Harriet Tubman returned to the South 19 times to bring over 300 slaves to freedom and she never lost a passenger. Her mission was to guide them through unknown lands and take care of their needs.

Each time a “passenger” reached a “station” in the North, it meant food, clothing, and a place to hide when capture was imminent. Many folks (Black, White, Natives) risked their lives to help slaves escape. Estimates are that as many as 100,000 people escaped slavery between the American Revolution and the Civil War.

One of the ways the conductors, passengers and abolitionists communicated with each other was through the images on quilts and displaying them in plain view. Several patterns were used to help slaves and conductors navigate the Underground Railroad. Here is the Story of the Underground Railroad the brave men and women built, maintained, fought and died for so their legacy could continue in 2018 and beyond. The descriptions and meanings of the quilt patterns are from left to right.

Story of the Underground Railroad

The Monkey Wrench turns the Wagon Wheel toward Canada.   With help from Jesus, the Carpenter, follow the Bears’ Trail through the woods.

Shoofly told us to dress up in cotton and satin Bow Ties.  Follow the Flying Geese and Birds in the Air, stay on the Drunkard’s Path.  Take the Sailboat across the Great Lakes to the North Star above Canada.

Alternating path of dark and light can be used to show a direction.

To a slave, the master carpenter was Jesus. As slaves worked in the fields, they sang spirituals. Plantation owners thought slaves were singing about joining Jesus in Heaven. Run-aways recognized it as a directive to plan their escape. To follow the Carpenter’s Wheel to the west-northwest. Imagine the beauty of the sun setting behind the Appalachian Mountains to the west on their journey to Ohio and freedom.

Slaves were to move in a staggering fashion to allude any following slave hunters. They were to even double back occasionally on their tracks to confuse slave catchers who were pursuing them.

The North Star was the guiding light leading the slaves to Canada and freedom. The Big Dipper always points to the North Star, which is in the handle of the Little Dipper. Perhaps no song is more connected to the Underground Railroad than Follow the Drinking Gourd. Secret music they sang behind closed doors.

Wagons had hidden compartments and was one of the primary means of transporting runaways. The Wagon Wheel meant to pack provisions that were essential for survival. The Wagon was also symbolic of a “chariot that was to carry them home”.

Beginning in the 1600s, Africans were imported to New England to work aboard whalers, fishing boats and trading vessels. The knowledge gained by black sailors of northern geography and the languages and customs of free ports made them invaluable members of the Underground Railroad.

Black sailors and ship owners helped many slaves escape directly, hiding them on board their ships and spiriting them away, and indirectly, by passing on directions and messages from family members awaiting them in freedom. Sailors were able to exchange information with enslaved blacks at port cities, forming an important link between slaves in the South and their free counterparts in the North. Forbidden to read and write, slaves depended on the knowledge and experiences of those who traveled before them. They were to even double back occasionally on their tracks to confuse slave catchers who were pursuing them.

When the Compromise of 1850 strengthened the Fugitive Slave Act, allowing slaveholders to retrieve slaves in Northern states and free territories, runaway slaves weren’t safe until they reached Canada. Many depended on ships and ferries to cross icy Lake Erie.

Abolitionists gave runaways baskets of provisions and tools, such as flint and compasses, to aid them in their flight. Abolitionist women would transport important provisions and food in full laundry baskets, up and down the stairs, amongst the clothes so as not to arouse suspicion. To the world, a woman with a full laundry basket looked like an ordinary woman going about her work.

Once runaways made it safely through the Appalachian Mountains, they were to travel to the “crossroads” or a city where they would find protection and refuge. The main crossroads or terminal was Cleveland, Ohio. Four or five overland trails connected with Cleveland, and numerous water routes, crossing Lake Erie into Canada and freedom.

As part of the secret language, Cleveland became known as Hope, Detroit, MI was referred to as Midnight, Men ready to be delivered to safety were called “hardware” and women were referred to as “dry goods”. The first four blocks make up a directive code for men and women headed for freedom. The Monkey wrench turns the wagon wheel toward Canada on a bear’s paw trail to the crossroads.”

Slaves learned they were take their directions from migrating geese. Since geese fly north in the spring, it was also the best time for slaves to escape. A clever quilter wishing to assist the runaways could show direction simply by making one set of Geese distinct from the others. One block on the quilt could act as a compass, transforming the quilt into a map.

This indicated a specific log cabin in Cleveland that was a safe house or it directed runaways to build a log cabin to weather out winter and establish permanent residency in a “free” area. The colored blocks in the center of the cabin have different meanings:  Red represents the heart or fire of the cabin. Black indicates this is a “safe” house. Yellow indicates a light or beacon in the wilderness.

A heavy metal tool used by the blacksmith. The blacksmith was the most knowledgeable person on the plantation, and was known as the “Monkey Wrench”.

This quilt symbolized the time to collect tools they would need on their journey to freedom. Physical tools to construct shelter, defend themselves, and for determining direction. Mental tools to be cunning, alert, knowledgeable and the ability to discern motives of strangers.

Slaves wore distinguishable garments that eventually became tattered and torn. Free blacks would often meet them in a safe place and give them fresh clothing. On the final leg of their journey, they could walk through town undetected to ships waiting to take them across the Great Lakes to Canada and freedom.

Birds in the Air:

Deborah Coates, wife of Quaker Lindley Coates, of Lancaster County, Pennsylvania originally designed a Birds in the Air directional quilt. They were abolitionists and ran Safe House #5 on the Underground Railroad. The choice of fabric and placement of blocks showed the runaways which way to travel.

Runaways were directed to follow the actual trail of a bear’s footprints. Most escapes happened in the spring after the bear’s winter hibernation when it was easiest to follow the bears’ paw prints which lead to food and water.

A person who’s responsibility was to secretly aid and harbor fugitives. Sometimes slaves hid in churches, caves or graveyards.

Now that you know the history. What will your legacy be?